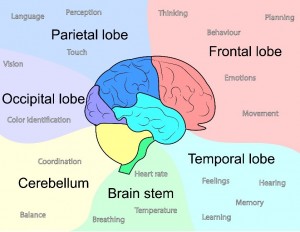 A common misconception states that, when it comes to intelligence, brain size matters. In science fiction, the species with the biggest brains are the smartest. Consider the Talosians in Star Trek’s “The Menagerie,” Martians in H. G. Wells’ The War of the Worlds, or “The Sixth Finger” episode of The Outer Limits. This mythology often translates into schoolyard taunting and jokes about “brainiacs” and the gifted child’s “big brain,” erroneously equating intelligence with size.

In fact, gifted people generally do not have significantly bigger brains than average. What they do appear to have is comparatively larger regional volume within specific areas of their brains.1 This increased grey matter volume is used to compute information at a pace that suggests significant qualitative differences in the following regions:

These larger brain regions correlate to areas associated with higher intelligence and with sensory processing experiences.7 Specifically, language, sensory processing, visual, and emotional areas are impacted, all of which are, incidentally, associated with superstimulabilities, often known as overexcitabilities (OEs). The OEs were identified by the Polish psychologist Kazimierz Dabrowski, who “believed that some people have more ‘developmental potential’ than others, and that high intelligence (giftedness) and overexcitability were predisposing factors.”8 While there is some controversy regarding the existence of OEs on the one hand and the correlation with giftedness on the other, the identification of these comparatively larger brain regions may, in fact, provide some support to the theory. As it turns out, when used collaboratively, multiple disciplinary approaches to giftedness can support and enhance each other.

Your brain does not develop as a lump. ~Joanna Haase, PhD, MFT

Different parts of the brain will develop in different ways at different times, in an ongoing game of brain region musical chairs. For various periods of time, one area may gain greater influence. This asynchronous development of the brain may correlate to minor quirks in thinking, learning, or behavior. More significant asynchrony may explain intense OEs or some of the common comorbidities sometimes associated with giftedness, including conflicts in visual and auditory processing, dyslexia and possibly ADHD and autism.

Parents often find themselves wondering whether an observable behavior is “just a quirk” or rises to the level of a pathology. Distinguishing between overexcitabilities, as commonly understood by parents and many mental health professionals, and behaviors with more significant implications is not necessarily a clear choice. Due to the complexity of the brain, myriad factors almost always influence relative outcomes. While diagnostic terminology is useful in finding resources (such as in psychological fields) and accommodations (in educational field), advancements in neuroscience allow us to understand the brain wiring of the individual and unique child. A variety of causes can potentially manifest in a set of common behaviors, and detecting what is actually happening neurologically beats the pants off of psychological guesswork.

They would if they could but they can’t so they don’t. ~Joanna Haase, PhD, MFT

The brain does not grow at a consistent rate across all areas. The resulting asynchrony—particularly when these specific regions develop asymmetrically—can lead the gifted child to great strengths in some areas but also to a level of relative difficulty in others. The sections of the brain that have to work together on a particular task may not be in sync, thereby undermining efforts towards a skill or accomplishment. For example, a child who has a vibrant imagination or strong visual perception may desire to write down their ideas or turn them into works of art but be stymied by less well-developed fine motor skills or difficulty expressing language at a comparable ability level. In many gifted children, this asynchrony is not so extreme that it cannot be mitigated or accommodated in some way. For the gifted child whose asynchrony rises to the level of pathology—leading to a dual diagnosis, or twice-exceptionality—this can be a more serious concern requiring intervention to alleviate frustration and allow them to pursue their interests and accomplish their goals.

Some parents prefer to think of these asynchronies as merely “typical giftedness” and sometimes that is a valid description. Other times, they prefer either to avoid labels or not explain them to the child in order to protect their child’s feelings or how others may see the child.

Even when they are not especially quirky, their giftedness may be visible in behaviors and accomplishments, resulting in less than ideal social responses from others. Children know when they are different, often suspecting they are “broken” long before anyone else acknowledges their uniqueness. They also may engage in activities and learning opportunities using skills where they have strengths, but avoid those where they feel inadequate or for fear of being “found out” as a broken child. They are better off understanding themselves than being allowed to default to negative assumptions and poor self-concept. Parents and other influencing adults should seek to give these children experiences that allow those areas of their brain to develop at an appropriate pace and manner. These children may need scaffolding so that they can use their strengths to move ahead while continuing to provide opportunities for development both intellectually and emotionally.9

It is a difficult road to navigate as parents, educators, clinicians and medical professionals try to distinguish between what is pathology and what is a “quirk.” What we want to stress is that if it is a problem then it is a problem and we need to address the problem thoughtfully with the idea that gifted brains have a lot of complicated things going on. Sometimes we need to give the child time to grow into their brains, sometimes they need scaffolding, sometimes they need real therapies and medication but they always need us to be thoughtful about how we are approaching our parenting.

Utilizing the larger regional volume is one aspect of the gifted brain, but that’s not the the whole picture. Next, we’ll examine activation and connectivity.

Neuroscience of Giftedness: Physiology of the Brain

Gifted Research and Outreach (GRO) is a non-profit corporation whose mission is to promote a comprehensive and accurate understanding of giftedness through research and outreach. GRO is committed to researching the physiology of giftedness; educating medical, psychological, and teaching professionals about the physical and psychological impacts of giftedness; and cultivating a national outreach campaign to correct myths and inspire social change, so that the needs of gifted individuals may be openly discussed.

GHF envisions a world where all children are understood and supported in their strengths and challenges, and families are respected in their educational approaches. GHF supports, educates and advocates for gifted and twice-exceptional children, their families, and the professionals who serve them, as they pursue alternative, lifelong educational paths.

GRO and GHF have partnered on this project to spread the word about the neuroscience of giftedness to the gifted community, medical and educational professionals, and other service providers. Greater understanding will lead to a better quality of life for our children, their families, and society as a whole.